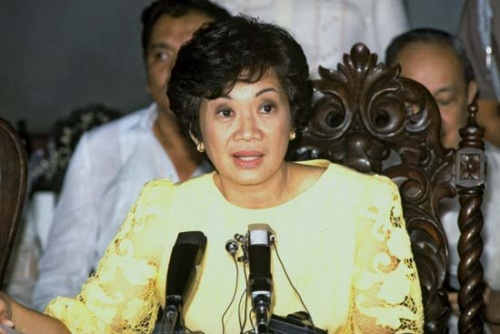 Aquino had been suffering from colon cancer for more than a year and recently refused further treatment. Photo by pinoytimes.ca

The Philippines has declared 10 days of mourning for its former leader Corazon Aquino, Asia's first female president, who has died at the age of 76.

Flags are at half-mast and hundreds of people have tied symbolic yellow ribbons to cars and trees.

Aquino had been suffering from colon cancer for more than a year and recently refused further treatment.

Hundreds of people have been visiting her home and the shrine where her 1986 revolution culminated, leaving yellow flowers and lighting candles.

Aquino's body will lie in state at the De La Salle Catholic school in Manila from Saturday evening to Monday morning.

She will be buried beside her husband at the Manila Memorial Park in a private ceremony on Wednesday, her son said.

Aquino was catapulted into politics following the murder of her husband, the prominent Senator Benigno "Ninoy" Aquino, who had been preparing to run for president.

He had already spent seven years in prison following President Marcos's declaration of martial law, with his wife as his only contact with the outside world.

After winning the presidential elections in 1986, she went on to run a country deeply divided after years of martial law and communist insurgency.

Aquino was nominated for the Nobel Peace Prize in 1986 and later received several awards and citations for her work to promote democracy and human rights.