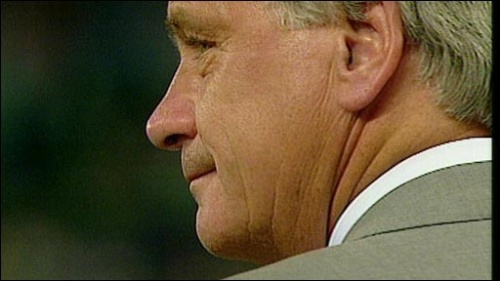 Robson will be best remembered on the international stage for leading England to the 1990 World Cup semi-final. Photo by bbc.co.uk

Former England manager Sir Bobby Robson has died at the age of 76, following a long battle with cancer, the BBC reported.

Robson will be best remembered on the international stage for leading England to the 1990 World Cup semi-final.

At club level, he cut his managerial teeth at Fulham before establishing his credentials at Ipswich where he won the FA Cup and Uefa Cup in a 13-year stay.

Spells at PSV Eindhoven, Sporting Lisbon, Porto and Barcelona followed before he managed at Newcastle.

Robson made his final public appearance at a charity match at Newcastle's St James' Park on Sunday.

A statement issued on behalf of his family said: "It is with great sadness that it has been announced today that Sir Bobby Robson has lost his long and courageous battle with cancer.

"He died very peacefully this morning (Friday) at his home in County Durham with his wife and family beside him.

"Sir Bobby's funeral will be private and for family members only.

"A thanksgiving service in celebration of Sir Bobby's life will be held at a later date for his many friends and colleagues.

"Lady Robson and the family would very much appreciate it if their privacy could be respected at this difficult time."