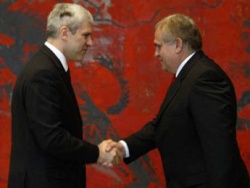 The Republic of Macedonia has appointed Alexander Vasilevski, a career diplomat, as the country's new Ambassador to Bulgaria, the Macedonian press announced.

The appointment comes almost a year after the previous Macedonian Ambassador to Bulgaria, Abdirraman Aliti, withdrew from his position over family matters.

Vasilevski used to Macedonia's Ambassador to Serbia but in October 2008 he was declared persona non grata by the Serbian authorities after Macedonia recognized the independence of Kosovo. He will be fifth Macedonian Ambassador to Bulgaria after the establishment of the bilateral diplomatic relations in 1992.