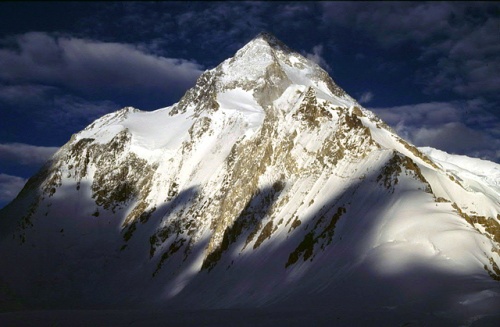 Quoting Doichin Boyanov, "the upper part of the track was very technical and involved climbing with front teeth on crampons and 2 ice axes." Photo by 7zummits.dk

Four Bulgarians managed to climb the Himalaya eight-thousander Gasherbrum-1 or the so called Hidden peak (8069 m above sea-level).

Nikolay Petkov, Doychin Boyanov, Boyan Petrov, and Nikolay Valkov reached the peak Sunday, July 26 around 8 am local time, and announced by e-mail to the Bulgarina news agency, BTA, about their achievement.

Currently the four are situated in the Base camp 4 (7 300m) and are about to continue their journey down to the valley.

The attack began at half past midnight, 10.30 pm Bulgarian time on July 25.

Quoting Doichin Boyanov, "the upper part of the track was very technical and involved climbing with front teeth on crampons and 2 ice axes."

Together with the Bulgarian party at the top where also Veika Gustafson (Finland) and Kazuya Hiradide (China).

This is the first climb of Gasherbrum 1 by a Bulgarian team. For Boyan Petrov and Nikolai Valkov this climb is the first of eight-thousanders and for Doichin Boyanov is the third after Mount Everest in 2004 and Nanga Parbat in 2006. Nikolai Petkov has climbed 4 such before - twice Mount Everest in 1984 and 2004, also Dhaulagiri and Nanga Parbat in 2006.

There are 3 more eight-thousanders left to be climbed on behalf of Bulgaria: K-2, Kangchenjunga, Manaslu.

The eight-thousanders are the fourteen independent mountains on Earth that are more than 8 000 meters high above sea level. They are all located in the Himalayan and Karakoram mountain ranges in Asia.

Society » Be a reporter: Write and send your article
Tags: Himalaya
Advertisement
Advertisement
Expats.bg All Are Welcome! Join Now!
More from Society