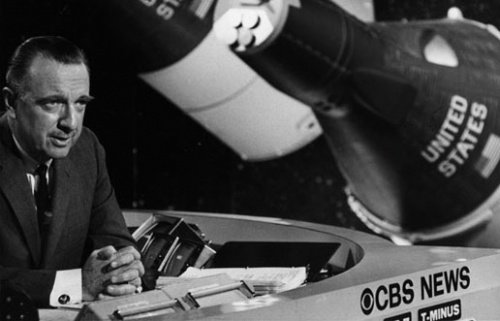 Cronkite presented the evening news programme for CBS from 1962 to 1981, helping the programme to become the most watched bulletin in the US. Photo newsroom-magazine.com

The former US TV news anchor Walter Cronkite, known to millions as "the most trusted man in America", has died at the age of 92.

An executive for the CBS news channel said Cronkite died at his New York home with his family at his side. He was reported to have been ill for some time, the BBC reported.

Cronkite presented the evening news programme for CBS from 1962 to 1981, helping the programme to become the most watched bulletin in the US.

His career covered such major global events as the assassination of former US President John F Kennedy, the moon landing, Watergate, former President Richard Nixon's resignation and the fall of Saigon.

In 1972, he was deemed by a poll of the US public to be, "the most trusted man in America", beating presidents, members of congress and other journalists.

He would end his broadcasts with his signature sign-off: "That's the way it is."

Cronkite's opinion was so trusted by the US public that when he criticised the war in Vietnam, President Lyndon B Johnson is reported to have said: "If I've lost Cronkite, I've lost middle America."

US President Barack Obama said Cronkite had been "a voice of certainty in an uncertain world", and had set the standard by which all other news professionals were judged.