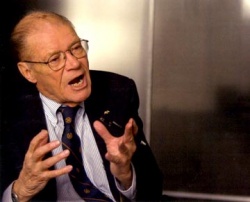 Robert McNamara, who served as US defense secretary during the Vietnam war and the Cuban Missile Crisis, has died aged 93.

McNamara, who served under presidents John F Kennedy and Lyndon B Johnson, was also an architect of the US policy of nuclear deterrence, the BBC reported.

He had suffered poor health for some time and died at his home in Washington DC, his wife Diana said.

After retiring in 1981, he championed the cause of nuclear disarmament.