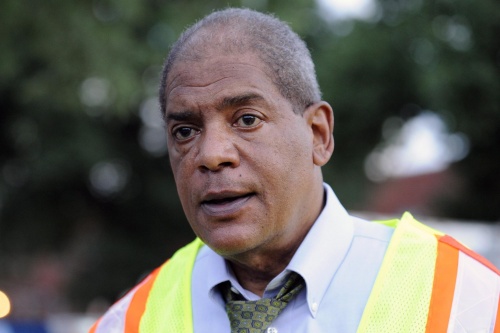 There is, however, still conflicting information about the number of fatalities.

Fenty said 76 people were taken to hospitals, including two in critical condition. Their conditions remained stable overnight while the condition of another critical patient was upgraded.

The crash site is being treated as a rescue scene, because authorities fear they might find more bodies in the wreckage.

Another news conference is scheduled for 5 pm ET to hopefully bring more light into the horrific accident.

The collision occurred along the Red Line, in the pick of the rush-hour, just before 5 pm on an above-ground track in the District of Columbia near the Maryland border.

According to Metro authorities, both trains were on the same track, headed in the same direction, south out of the Fort Totten station.

Metro Chief, John Catoe, said the first train was stopped on the tracks, waiting for another to clear the station ahead, when the trailing train plowed into it from behind.

The collision caused cars of both trains to smash together in the worst accident in the Metrorail system's history.

The operator of the trailing train, Jeanice McMillan of Springfield, Virginia, was confirmed to be among the dead.

Officials would not say how fast the train was traveling at the time of the accident.

Each train was capable of holding as many as 1 200 people. The trains were bound for downtown, which would would mean they were less likely to be filled during the afternoon rush hour.

A National Transportation Safety Board (NTSB) is investigating the crash, assisted by the FBI.

A safety investigator said the trailing train was part of Metro's aging fleet that federal regulators had recommended three years ago be phased out or retrofitted, and was not equipped with recording devices.

Investigators hope to recover recorders from the train that was struck that could provide valuable information that might help determine why the crash occurred.

Amy Kudwa, spokesperson for the Department of Homeland Security said two hours after the crash that federal authorities had no indication of any terrorism connection.

This is the second Metro crash to involve fatalities in the 33-year history of the transit authority. In January 1982, a derailment killed three people. The only other collision between Metro trains occurred in 2004.

President Obama issued a statement saying that he and First Lady, Michelle Obama, were "saddened by the terrible accident," and thanking first responders "who arrived immediately to save lives."