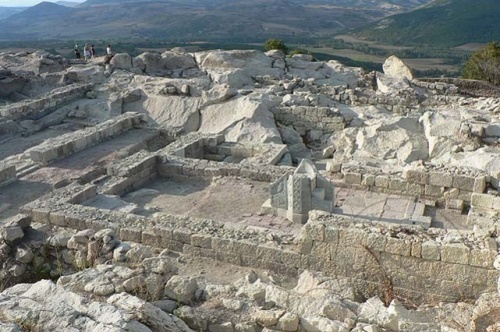 The new tourist center at the ancient Thracian city of Perperikon will be funded by the PHARE Program. Photo by bulgariainside.com

The EUR 2,45 M tourist center is funded under the Trans-border Cooperation module of EU's PHARE Program.

Parvanov told the several hundred people who attended the ceremony that Perperikon was one of the symbols of Bulgaria's ancient history, and pointed out that the Bulgarian government had invested over BGN 10 M in the archaeological complex in the recent years.

The turning of the first sod of the new tourist center was part of the Ninth International Festival Perperikon 2009, which will take place in the nearby city of Kardzhali June 22-30, 2009.

The construction of the Perperikon Tourist Center will employ 120 people, and another 130 will be working on the continuing excavations on the site of the ancient Thracian city.

According to the main explorer of Perperikon, archaeologist Ovcharov, aka "the Bulgarian Indiana Jones", 250 000 tourists visited Perperikon in 2008. During the 2009 May holidays (May 1-6), the Thracian city was visited by 20 000 people.

The Thracian city of Perperikon is an ancient archaeological complex located 15 km north of the city of Kardzhali. It is believed to be site of the sanctuary of god Dionysus which was widely known in the ancient world.

Human activity at Perperikon dates back to 5 000 BC, and in the Middle Ages the former ancient sanctuary became a key fortress controlling the Eastern Rhodoppe Mountains.

Professor Nikolay Ovcharov started the excavation works at Perperikon in 2000 and has revealed part of a stunning ancient architectural complex which is still being unearthed.