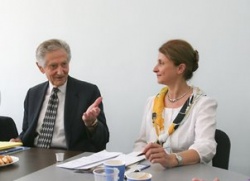 He received a B.A. from San Diego State University in 1952, and an LL.B. from University of California, Berkeley, Boalt Hall School of Law in 1955.

John Wallace served in the United States Navy as a Second Class Petty Officer from 1946 to 1949.

He was in private practice of law in San Diego, California from 1955 to 1970, at the law firm of Gray Carey Ames & Frye.

He assumed senior status on April 8, 1996. As a senior judge, Wallace has a reduced caseload, but he continues to hear cases in the Ninth Circuit, and he sits by designation from time to time as a visiting judge on other federal appellate courts.

Throughout his career as an appellate judge, Wallace has been deeply interested in developing strong judicial systems around the world. Judge Wallace's support for the "rule of law" movement, which seeks to impart the concepts and ideals of an independent judiciary and impartial judicial system, dates to 1972, when he began using personal vacation time to visit judiciaries overseas.

After taking senior status, he began to spend about half his time on the effort. In all, he has worked directly with judiciaries in more than 60 countries, and on every continent.

The American Judicature Society honored Wallace with its 24th Annual Edward J. Devitt Distinguished Service to Justice Award. The award is one recognizing "significant contributions to the administration of justice, the advancement of the rule of law, and the improvement of society as a whole", and was formally presented to Judge Wallace by US Supreme Court Associate, Justice Anthony Kennedy, on October 19, 2006.

A devout Mormon, Judge Wallace has been active in the Church of Jesus Christ of the Latter-day Saints, serving in local and regional governing posts. Judge Wallace also has long supported the Boy Scouts of America, serving on the local chapter's board of directors and executive committee from 1977 to 1993.