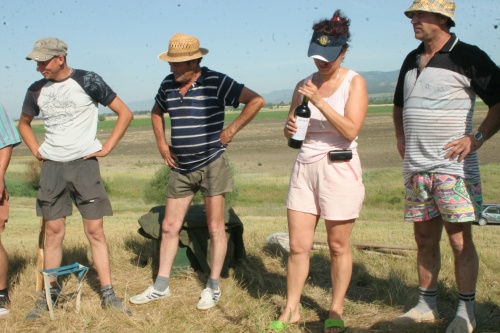 Archaeologist Diana Dimitrova (second on the right) and her team kicked off Tuesday their excavation of Thracian mounds in Southeast Bulgaria. Photo by BGNES

Archaeologist Diana Dimitrova and her team started Bulgaria's archaeological summer season with excavations close to the city of Sliven.

Dimitrova is the widow of the renown Bulgarian archaeologist Georgi Kitov who died of a heart attack in September 2008.

Dimitrova's team is planning do excavation work at four ancient Thracian mounds in Southeast Bulgaria. This year's excavations of her team are continuing the efforts of Kitov to prove that the so called "Valley of Thracian Kings" in fact went as far east as the city of Sliven.

Several years ago, Kitov's expedition in the area discovered absolutely unique Thracian artifacts including a gold mask of a Thracian ruler.