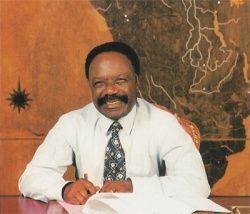 His death was confirmed Monday by the country's Prime Minister Jean Eyeghe Ndong in a written statement, the BBC reported.

There had been conflicting reports earlier on Monday about whether Bongo, who had led Gabon since 1967, had died in a Spanish clinic.

In his statement, Ndong said Bongo had died of a heart attack shortly before 12:30 GMT.

He said Gabon would observe 30 days of mourning, and called on the Gabonese people to "stand together in contemplation and dignity".

Omar Bongo became vice-president, and then president, of Gabon in 1967. He stopped work in May, and entered a clinic in Barcelona. Government officials insisted it was for a check-up, but other reports said he had cancer.

Oil earnings mean that Gabon is officially one of Africa's richest states but analysts say that the political elite has kept most of the money for themselves.

Most of the country's 1,4 million people live in poverty.

Bongo was one of three African leaders being investigated for alleged embezzlement by a French judge. The others are Denis Sassou-Nguesso of the Republic of Congo, and Teodoro Obiang Nguema of Equatorial Guinea.