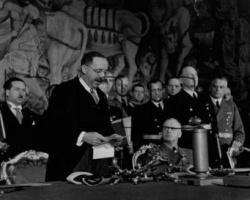 The Bulgarian Prime Minister Bodgan Filov (left) at the signing of the agreement with which Bulgaria joined the Axis, March 1, 1941. Photo by bg-history.info

Sofia Mayor, Boyko Borisov, is asking the Sofia City Council to renounce its decision to name a street in the capital after Bogdan Filov.

Bogdan Filov was Bulgaria's Prime Minister in 1940-1943, and the statesmen who signed Bulgaria's accession to the Tripartite (Axis) Pact.

The decision to name a street after Bogdan Filov was made at the meeting of the Sofia City Council last Thursday. The move, however, has spurred fierce protests on part of the Embassy of Israel in Sofia.

In a letter to Sofia Municipality dated May 25, Israel's Embassy in Bulgaria has expressed its protest over the decision of the city councilors, and states it had been shocked by it.

"Bodgan Filov is the Bulgarian Prime Minister who placed his signature under the pact for collaboration with Hitler's Germany, presented for voting antisemitic legislation, and sent Bulgarian Administration to the New Lands to deport the Jewish population there", the Israeli letter of protests states as quoted by BGNES.

Israel's Embassy declares its disbelief of this move that puts a stain on the image of the Bulgarian capital and its administrators, in the letter's wording.

The motion to name Street No. 202 after Bogdan Filov was initiated by Councilor Borislav Borislavov from the rightist Union of Democratic Forces. It was supported by the other rightist parties GERB and DSB, the far-right Ataka party, the centrist NMSP; the Bulgarian Socialist Party voted against it.

After he became Prime Minister on February 15, 1940, Bogdan Filov was instrumental in passing the Nation Protection Act which copied the Nuremberg Laws in Nazi Germany.

On March 1, 1941, Filov signed Bulgaria's accession to the Axis Pact after his government and the Bulgarian Tsar Boris III (father of former Tsar and former PM Simeon Saxe-Coburg) managed to stay remain neutral for almost 2 years.

Bogdan Filov worked to prepare the deportation of 20 000 Bulgarian Jews to Nazi death camps. After public resistance, however, his government manage to deport only Jewish population of the newly-acquired territories under Bulgarian administration - about 12 000 people.

After pressure from Nazi Germany, Filov's government also declared symbolic war on the USA and UK on December 13, 1941, which later led to massive Anglo-American aerial bombardments of Sofia and other Bulgarian cities.

After the mysterious death of Tsar Boris III, Filov became one of the three regents of the minor Tsar Simeon II Saxe-Coburg. He remained a regent from August 28, 1943, until September 7, 1944.

After the arrival of the Soviet Army and the ensuing left-wing coup on September 9, 1944, Filov was jailed, deported to the Soviet Union for three months, then brought back to Sofia, sentenced to death and executed by the so called "People's Court" on February 1, 1945.

Filov's government is also known for having signed the Treaty of Craiova with which Southern Dobrudja was restored to Bulgaria from its neighbor Romania. Filov is also known for extensive academic activity and research in the field of archaeology of the ancient world, and conducted some of the first excavations in Bulgaria.