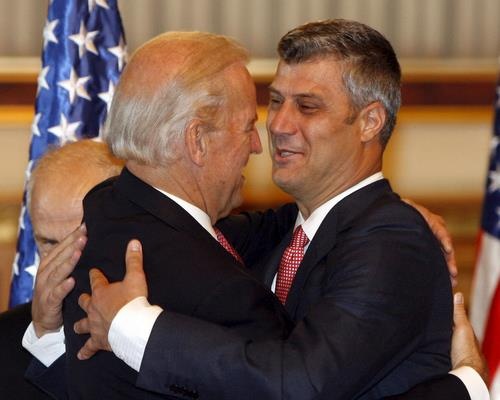 "Thank you... for honoring me with this medal. I was just presented with the (Golden) Medal of Freedom. I don't deserve it, but I received it on behalf of the U.S.," Biden said as quoted by BGNES.

Vice-President Biden is the highest-ranking American official to visit Kosovo after it declared independence from Serbia on February 17, 2008. He has been a strong proponent of Kosovo's independence.

"The U.S. has made clear that the independence of Kosovo is irreversible and it will not change. A whole and united Kosovo is a known requirement... of U.S. policy. A united Kosovo is absolutely essential," Biden said in Prishtina where he was welcomed by cheering crowds and huge "thank you" banners.

Before going to Kosovo, Biden visited Sarajevo and Belgrade, where he told Serbian President Boris Tadic that the recognition of independent Kosovo was not a necessary prerequisite for Serbia to get US support for joining the EU.

Since the 1990s Biden has been of the most ardent supporters of US intervention in the Western Balkans. In his autobiography published in 2007, the present US Vice-President states the thing about his career that he was proud of the most, was his work on the Balkans.