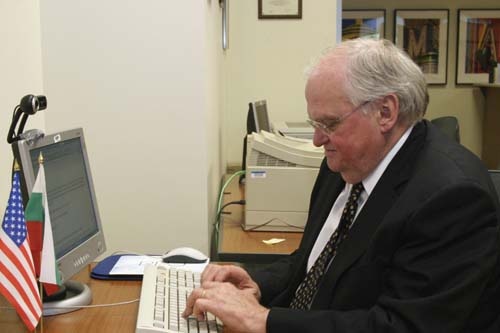 Long-time TIME Magazine Correspondent Barry Hillenbrand at the US Embassy in Sofia answering questions during a web chat. Photo by bulgaria.usembassy.gov

Barry Hillenbrand was born in 1941 in Chicago. He spent spent 34 years with TIME Magazine predominantly as a foreign correspondent.

In 1963, Hillenbrand graduated Loyola University, Chicago, with a BA degree in history. In 1963-1965, he served in the US Peace Corps in Ethiopia. In 1965-1967, he undertook graduate studies in history at New York University, before joining the Time Magazine in 1967. In 1974, Hillenbrand married Nguyen Thi Phuong Nga. Their son Kim was born in 1979.

In 1968-1970, as TIME correspondent in Boston, Hillenbrand covered the Harvard strike and student unrest. In 1970-1972, he was correspondent in San Francisco and Los Angeles where he reported Bobby Fischer cover story.

In 1972-1974, he was TIME correspondent in Saigon covering the wars in Vietnam and Cambodia, and unrest in Thailand.

In 1974-1977, Hillenbrand was Latin American Bureau chief, based in Rio de Janeiro covering South America. During this period he also reported on the Angolan Civil War and the Falklands War.

In 1983-1986, Hillenbrand was TIME Persian Gulf bureau chief, based in Bahrain, covering the Iran-Iraq War, Saudi Arabia and Kuwait.

In 1986-1992, he was TIME bureau chief in Tokyo, where he covered the death of Emperor Hirohito, US-Japan trade issues. He also covered Korea including unrest and elections in 1987 and the Seoul Olympics in 1986.

In 1992-1999, Hillenbrand was TIME bureau chief in London. He covered British elections, the Northern Ireland peace settlement and the British royal family, including the death of Princess Diana. In 1995 he was the President of the Association of American Correspondents in London 1995. He also covered the Olympics in Atlanta and Nagano.

In 1999-2001, Hillenbrand was TIME correspondent in Washington, DC. He covered the 2000 American election and the 2000 Sydney Olympics.

In 2001, he retired from TIME, and since then has been doing some free lance writing and book reviewing for TIME (covered the 2002 Salt Lake Olymics), Washington Post, AARP The Magazine, Commonweal. Edited WorldView, the magazine of the National Peace Corps Association.