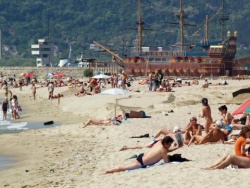 According to the State Tourist Agency's head, Aneliya Krushkova, it is vital that Bulgaria is not advertised only as a good sea destination. File photo

Bulgarian emigrants think of Bulgaria as a place of rising corruption, lack of reforms, and great sports success.

This became clear Monday at the Fifth World Bulgarian Media Meeting, after a survey showed how Bulgarian emigrants answered the question "What do you connect Bulgaria with?"

Many of the participants in the survey think that historical tourism would be a good commercial for Bulgaria.

The study was presented as part of a discussion on "Bulgaria's Image in Font of the World", in which the Minister of European Affairs, Gergana Passy, took part.

"Bulgaria's image in the foreign media is a mirror image of that in our and corresponds to the image we are creating. Bulgaria's low spirit condemns it to stay in the freezer of the European media", Minister Passy said.

According to the State Tourist Agency's head, Aneliya Krushkova, it is vital that Bulgaria is not advertised only as a good sea destination. In her words, a change in the advertising strategy needs to be done.

She also said that since the start of the changes in Bulgaria in the early 90's, more than EUR 35 B had been invested in Bulgarian tourism.