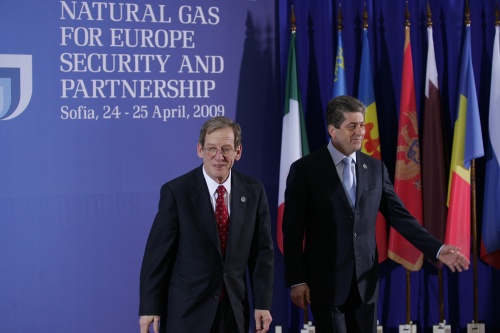 Answers by the US Special Envoy for Eurasian Energy, Ambassador Richard L Morningstar,to questions by Novinite.com's Ivan Dikov during Morningstar's press conference after the end of the Sofia Energy Summit "Natural Gas for Europe", April 25, 2009.

With the completion of the Kazakhstan and Turkmenistan pipelines to China, it seems like China is winning the Eurasian energy scramble. Where does the greater US interest lie - with its NATO allies in Europe, or with China where it has massive investments?

First of all, with respect to the whole energy picture, I want to make this really clear. We are not for or against anybody. We want to develop cooperative relationships with all the countries that are involved. We are living in a time of financial crisis that is really a problem for all of us. We can't afford to be fighting about these issues, and we need to try to be constructive, and try to deal with the common issues together.

China is a country that I think we in the United States want to engage with, with respect to energy issues. I don't think it's a bad thing that China is involved in Central Asia. I think it helps the Central Asian countries. Maybe there are opportunities that we can cooperate - European companies, American companies, European countries, the United States - maybe we can cooperate with China in that part of the world, and it's something that we at least need to explore as an area of possible cooperation.

But that doesn't mean that we don't feel just as strongly as we always have about working with our European friends with respect to energy security needs in Europe. So I don't see it as an either-or situation, and I want to emphasize again - we are not for or against any - well, we are certainly not against any country, we are for all countries, better putting it.

To what extent is Europe's energy diversification strategy and its main project Nabucco conditional on the achievement of political stability in the Eurasian instability belt - and here I mean not just Iraq, but also Georgia, Afghanistan, Palestine?

With respect to the stability issue - and I understand the concerns over those kinds of questions. This is an area we constantly have to have under review, and under discussion.

But I don't have any particular concerns about pipelines going through Azerbaijan and Georgia as compared to those going through other countries from the standpoint of the integrity of the infrastructure. I think that the pipelines have been going through Georgia and Azerbaijan for years and years, and there have not been... despite the issues within the region they have continued to operate, and generally in an efficient way.

And I think that we have worked to make sure that there is protection for all pipelines, and, frankly, the Baku-Tbilisi-Ceyhan pipeline is a project I worked on ten years ago. I think it was the right policy at the time. I think it's even more the right policy today, and I am glad it's there. And that goes to Georgia, and Azerbaijan.

Could you say a few words about the US-sponsored AMBO (Albania-Macedonia-Bulgaria Oil) pipeline (aka Burgas- Vlora pipeline) - it seems to really have stalled in recent months?

I don't think I know enough about Albania-Macedonia-Bulgaria pipeline to give you a reasonable answer. I find it's always easier to be frank and straightforward so if I don't have a good answer I am not going to give it to you.