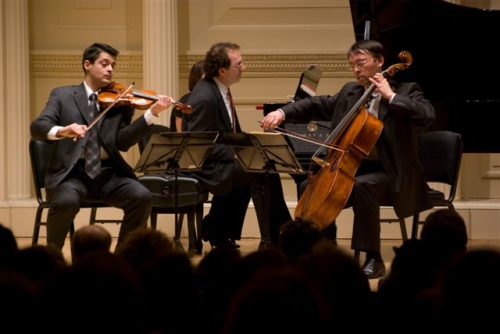 The New York Empire Trio, represented by the Bulgarian Virtuosi Artists, performed at Carnegie Hall in January and premiered the composition titled вЂњFanfare for ObamaвЂќ. Photo by Vanina Tsoneva

The New York Empire Trio and Bulgarian Virtuosi Artists are featured as artists of the month by the Obama Music, Arts and Entertainment Organization.

The honor was given after the Trio's outstanding January performance at Carnegie Hall.

Dennis Rooney from The STRAD wrote:"...a reading of unusual interest" "...alert and energetic account of Haydn... the effect was rollicking..."

The New York Empire Trio was founded by three musicians with renowned experience and talent. They perform a wide repertoire of classics and recent chamber compositions. Collectively, these musicians, Hristo Popov on violin, Kalin Ivanov on cello, and Joshua Pierce on piano, have won international competitions, recorded for the finest record labels, performed with orchestras in Europe, Russia, and the United States, and performed on television and radio.

The New York Empire Trio are represented by the Bulgarian Virtuosi Artists, founded in 1995 by prominent Bulgarian cellist Kalin Ivanov.

In January, the trio performed at Carnegie Hall and premiered the Roumi Petrova composition titled "Fanfare for Obama". Their performance was the grand finale of the BVA's 10th anniversary concert season at Weill Recital Hall (at Carnegie Hall) and was given in "honor of the historic election of President Barack Obama".

The concert was supported by the Bulgarian Ministry of Culture -Directorate of Music and Dance, the Bulgarian Consulate in New York, and the US published NEDELNIK newspaper.