World of Disney Arrives in Sofia 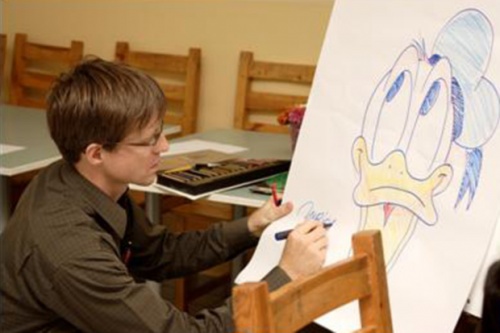 One of most prominent Disney artists, Ulrich SchrГ¶der, will visit Sofia in the occasion of the 18th birthday of the Bulgarian edition of the Mickey MouseвЂќ magazine. Photo by Sofia Photo Agency

Over 100 drawings of one of the most prominent Disney artists, Ulrich Schröder, are on display in Sofia from April 23 to May 3.

The exhibit can be enjoyed free of charge at the "Sredets" gallery, in the building of Bulgaria's Culture Ministry on "Alexander Stamboliiski" boulevard in downtown Sofia.

The exhibit titled "The World of Disney" is organized by the Bulgarian edition of the Mickey Mouse" magazine and is dedicated to its 18th birthday. Ulrich Schröder appeared in person Friday as a guest of the event. This is his second trip to Bulgaria.

Born in Aachen, Germany, Ulrich Schröder was the art director for Disney in Paris, where he coordinated the artwork for merchandising and promotional materials. He did illustrations and covers for German Disney comic books, as well as an occasional comic for Le Journal de Mickey.

He is a freelancer since 1989, and has done mainly merchandising artwork and covers for the Dutch Donald Duck weekly.

Schröder's love for Disney's characters began at the age of 3 when his parents bought his first "Mickey Mouse" magazine to console him after a fall on the street ending with a bruised lip.