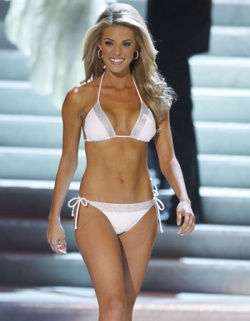 Carrie Prejean - Miss California - said she believed that "a marriage should be between a man and a woman". Photo by BGNES

The runner-up at the Miss USA beauty pageant says her fierce opposition to gay marriage prevented her from taking the first place in the competition.

During the televised event, Carrie Prejean - Miss California - said she believed that "a marriage should be between a man and a woman".

She had been asked for her views on the subject by one of the judges, celebrity blogger Perez Hilton.
"It did cost me my crown," said Prejean, after the competition, as cited by BBC.

The eventual winner of the pageant was Kristen Dalton, Miss North Carolina.

"We live in a land where you can choose same-sex marriage or opposite marriage," said Prejean, in a section of the show that has become a popular clip on YouTube.

"I believe that a marriage should be between a man and a woman," she continued.

"No offence to anybody out there, but that's how I was raised."

The remarks drew a mixture of booing and applause from the audience.

Speaking after the show, which was broadcast on Sunday evening in the US, Prejean said: "I wouldn't have had it any other way. I said what I feel. I stated an opinion that was true to myself and that's all I can do."

Hilton said he had been "floored" by Prejean's answer, which, he said, "alienated millions of gay and lesbian Americans, their families and their supporters".

He told ABC News: "She lost it because of that question. She was definitely the front-runner before that."

Four US states now allow gay marriage, but many other states have passed legislation outlawing it.