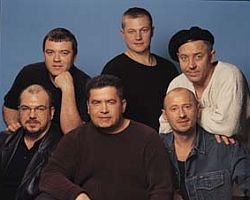 The news was reported by the Russian information agency ITAR-TASS.

The 49-year-old Kuleshov, who was a vocal for the popular group "Lubeh" or "Lube", has been a passenger in a "Mercedes" automobile that hit a parked minivan. He died on the spot. The driver, 33-year-old, Valeri Novikov, was taken to the hospital in critical condition and died later.

"Lubeh" is a folk/rock band from Lubertsy (Moscow suburb). Lubeh's music combines elements of Western rock and roll, traditional Russian folk music and military bard music. Starting in 1989 with their first release, they have created 13 albums inside of Russia.

Lubeh is the most popular Russian band in Bulgaria.

Obituaries » Be a reporter: Write and send your article
Tags: Kuleshov, Lubeh
Advertisement
Advertisement
Expats.bg All Are Welcome! Join Now!
More from Obituaries