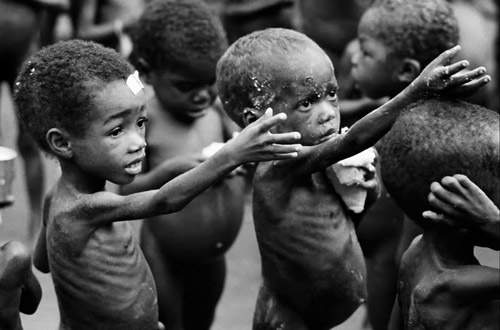 The UN has warned of a global hunger crisis over predicted poor crop yields. Photo by wordpress.com

Agriculture ministers from the G8 have held an unprecedented meeting after the UN warned that hunger threatens to "spiral out of control" in the wake of the financial crisis.

The three-day meeting, which opened in Italy on Saturday, is attempting to address a growing food crisis as harvests threaten to slump at a time when record numbers of people are already hungry. Crops are being hit by a combination of bad weather, falling food prices and farmers' being refused credit to buy seeds and fertilisers, the UK independent newspaper reported.

It is the first time that the agriculture ministers of the G8 leading economies have held such a meeting, and they have invited their counterparts from China, India, Brazil, Mexico, South Africa, Australia, Argentina and Egypt to join them in Treviso "to work out a common route to lead us out of the crisis and respond to the world food emergency".

The UN's World Food Programme warned: "As the global financial crisis deepens, hunger and malnutrition are likely to increase as incomes fall and unemployment rises. The world is at a critical juncture where we risk watching hunger spiral out of control. We cannot afford to lose the next generation."

The Food and Agriculture Organisation stated that harvests are set to fall his year "in most of the world's major producers". The UN adds that it would cost USD 6 B to stave off the resulting hunger, which would be "relatively inexpensive compared to the trillion-dollar rescue packages designed to save financial institutions".