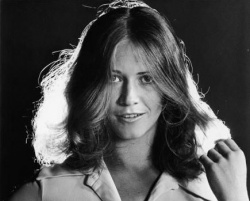 Procter & Gamble, unaware of Chambers' role in the X-rated film, used one of her photos s on its laundry detergent box. File photo

Marilyn Chambers, the legendary adult movie queen who was the wholesome model on Ivory Snow detergent boxes in the early 1970s when she made her adult movie debut in the X-rated classic "Behind the Green Door", died 56.

Chambers was found unconscious Sunday evening at her home in Canyon Country, Los Angeles County coroner's spokesman, Ed Winter, said, as cited by the Los Angeles Times
.
The cause of death is under investigation, but foul play is not suspected and an autopsy is pending.

Chambers was living in San Francisco and making ends meet working as an exotic dancer when she saw a newspaper ad seeking actresses for what was described as a "major" motion picture. It wasn't until she filled out an application that she discovered the movie was pornographic. The producers offered her the starring role.

"I thought I'd take a shot. I was intrigued by the story. I really liked the fantasy involved. And I figured it might be my last chance at something really big", she explained in a 1977 interview with the Los Angeles Times. She insisted that all the actors be tested for sexually transmitted diseases, and she demanded a percentage of the movie's gross receipts.

The low-budget "Behind the Green Door" became one of the biggest adult movie hits of the '70s, having received an unexpected publicity.

Procter & Gamble, unaware of Chambers' role in the X-rated film, used one of her photos that had been taken during her New York modeling days on its laundry detergent box (she's shown cuddling a laughing baby).

"Timing is essential for someone's career. That's what did it for me. The controversy of both those things happening at the same time", Chambers said in a 2007 interview with Rhode Island's Providence Journal.