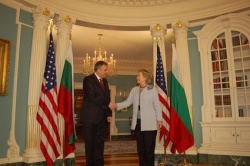 Bulgarian Deputy Prime Minister and Foreign Minister Ivailo Kalfin conferred with US Secretary of State Hillary Clinton in Washington on Wednesday. Photo by the Foreign Ministry

The US administration is unlikely to sign in the short term an agreement with Bulgaria for the alleviated issuing of visas.

This emerged after the meeting of Bulgarian Deputy Prime Minister and Foreign Minister Ivailo Kalfin with US Secretary of State Hillary Rodham Clinton in Washington on Wednesday.

Minister Kalin has asked for speeding up the process of including Bulgaria in the US Visa Waiver program, but it became clear that hopes for a quick progress are unrealistic. The program expires in the summer.

Minister Kalfin reconfirmed Bulgaria's interest in what the two countries have been doing for the last years to base their relationship on a very long-term strategic basis.

"We are allies in a number of international operations. We are sharing very same values in terms of promoting democracy, human rights protection. And I would like to continue this excellent tradition we have in the past, to start a very new era of cooperation with the new Administration," the Bulgarian minister said.

Ivaylo Kalfin will confer on Thursday with members of the National Security Council and the Department of Commerce.