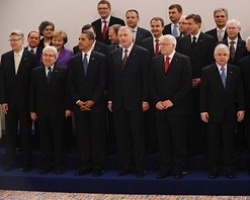 US President Barack Obama met Sunday in Prague with the leaders of the EU Member States. Photo by BGNES.

Bulgaria's PM, Sergey Stanishev, had a brief exchange Sunday with the US President Barack Obama.

Stanishev attended the meeting between the US President and the leaders of the European Union (EU) Member States in Prague.

Stanishev said in an interview for Darik radio that he had the opportunity to speak to Obama in person and to wish him success in the US stimulus program to overcome the negative effects of the global financial crisis.

Obama, on his part, had extended his sincere wishes for the well-being of all Bulgarian people.

Stanishev defined his short meeting with the US President as very important since it has been the very fist one, adding he was impressed by Obama's firm commitment to change many things in the way his country is run.

"He had to face the global financial crisis. I wished him the best of luck," Stanishev told the Darik radio reporter.

The Prime Minister also said that the US and Bulgaria had developed lately a unprecedented economic partnership, unknown in the last 100 years, and he was certain the cooperation would expand even further. Stanishev informed he had invited the US President to visit Bulgaria, adding he was convinced such visit would happen in the near future.

The PM defined the achieved agreement on the financial and economic crisis, between the EU and the US, as the most important outcome of the G20 meeting, the NATO summit and the meeting in Prague.

"I was a speaker on the topic along with the British Prime Minister, Gordon Brown. I stressed three key conditions needed to realize quickly the decisions of the G20 meeting in London: the speed, the scale and the consistency of the implementation. I think Bulgaria's voice was heard. Brown himself congratulated me for my speech," Stanishev informed.

The PM explained that other topics of discussion included the climate change, diversifying energy supplies to Europe, the situation in the Middle East and Afghanistan, admission of Guantanamo detainees to Europe. He said that Turkey's eventual EU membership has not been discussed in Prague.