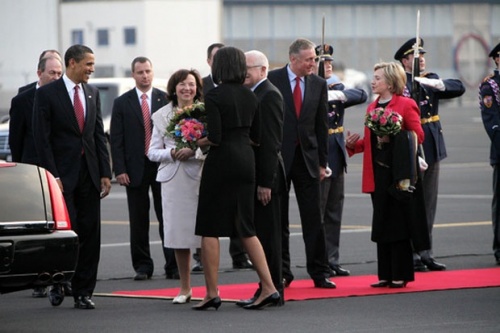 US President Barack Obama is in Prague Sunday to meet the EU leaders.

Obama and First Lady, Michelle, arrived in Prague at 6:15 pm Saturday evening, but did not have any formal meetings. The couple took the evening off to rest after the exhausting schedule in London, Kehl and Strasbourg.

Bulgaria's Prime Minister, Sergey Stanishev, will attend the meeting between the US President and the leaders of the European Union (EU) Member States. The meeting will take place in an informal setting, where Obama will be personally introduced to each EU head of state and cabinet leader.

The US President's visit in Prague is scheduled around the US-EU summit, focusing on continuing the dialogue about measures to deal with the negative effects of the global financial crisis, which began at the G20 meeting in London and continued through the historical NATO summit in Kehl and Strasbourg, marking the 60th anniversary of the Alliance.

A parallel discussion between the EU top diplomats and the US Secretary of State, Hillary Clinton, is also scheduled as part of the program of the US Presidential trip to Prague. The Bulgarian side will be represented by Bulgaria's Deputy Prime Minister and Foreign Minister, Ivaylo Kalfin.

Scores of photographers and reporters waited last night for the US First Couple to appear at the "U Zlate studne" restaurant, after the restaurant's manager confirmed the Obama's were going to dine there. It was later reported that the family decided to have dinner at the "Hilton" hotel, Darik radio informs.

At 10 am Sunday morning, Obama is delivering a speech about nuclear arms and nuclear disarmament. 30,000 are expected to gather at the "Hradcani" square in downtown Prague. The event will be held under the tightest security measures.

Later in the afternoon, the US President will fly to Turkey on an official visit to Ankara and Istanbul.