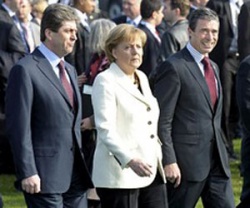 Bulgaria's President, Georgi Parvanov, said Saturday in Strasbourg, France, that NATO had serious issues with the process for nominating and picking its new Secretary-General.

Parvanov has pointed out that only the name of the Danish Prime Minister, Anders Fogh Rasmussen, had been mentioned during the discussions.

According to the President, Rasmussen is a worthy candidate but the other bidders also deserved to be discussed, BGNES reported.

Parvanov also said he was the only one who mentioned the candidacy of the Bulgarian bidder to head NATO, Solomon Passy.

"Apparently, NATO has issues with the nomination principles and mechanisms, which would be worth contemplating over in the future because we practically discussed only one single nomination... I find it no good that the other bidders were not presented during the discussions", Bulgaria's President told journalists in Strasbourg.