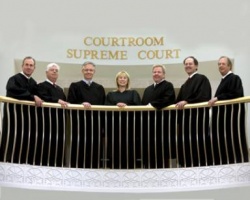 All seven judges of the Iowa Supreme Court ruled in favor of same-sex marriage. Photo by judicial.state.ia.gov

Iowa became the third state of the USA and the first in the Midwest to legalize same-sex marriage.

A unanimous ruling of the Iowa Supreme Court Friday led to the abolition of the state's decade-long ban. Thus, Iowa joins Massachusetts and Connecticut as the states where same-sex marriage is allowed.

The Iowa Supreme Court ruling is seen by many as part of a trend, in which same-sex marriage is gaining ground.

On Thursday, April 2, the state House in Vermont overwhelmingly approved a bill legalizing same-sex unions, following a similarly lopsided vote earlier in the state Senate. Vermont Governor, Jim Douglas, has said he would veto the measure but the deputies could override such a veto.

On March 26, the state House in New Hampshire voted narrowly to allow same-sex marriage in that state, sending the bill to the Senate.

By early June, 2009, the California Supreme Court must rule on the constitutionality of a November 2008 ballot, which banned same-sex marriage in the state.