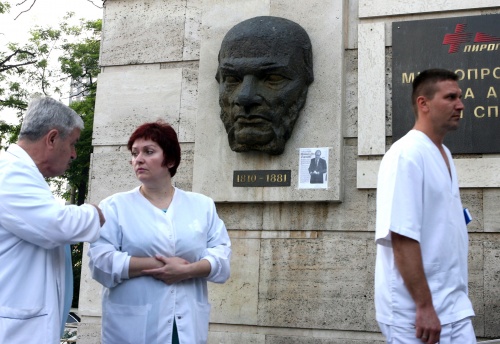 The doctors from the Sofia Institute for Emergency Medicine "Pirogov" informed that despite numerous surgeries, Bilyana Panyukova passed away Friday morning. Photo by Sofia Photo agency.

Bilyana Panyukova, mother of the two boys, who were slaughtered by their father, has died at the Sofia Institute for Emergency Medicine "Pirogov".

Despite tremendous efforts to save her and a number of surgeries, the 30-year-old woman passed away at 3:15 am Friday, the Pirogov docotors informed. An autopsy is scheduled Friday.

On February 4, Bilyana received 85% burns on her body after her husband, Mancho Panyukov, from the village of Osikovo set his father-in-law's house on fire and then slaughtered his two sons, ages 5 and 8, in front of shocked villagers. Panyukov was found hiding in a barn and was arrested the day after the murders.

Panyukov has been examined by medical experts, who found him in excellent health. He told them he felt no pain or remorse over murdering his sons and hurting his wife and relatives, but was too attached to the boys and killed them to spare them life's hardship.