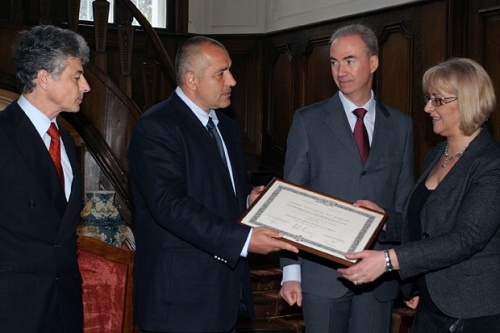 The Mayor of Sofia, Boyko Borisov, was bestowed Thursday the National French Order of Merit.

The ceremony was held at the French Embassy in Sofia. The Order, along with a special seal of the First French Republic, was bestowed to Borisov by French Ambassador to Bulgaria, Etienne de Poncins, and by the Secretary General of the French Interior Ministry, Henri-Michel Comet.

Borisov receives the Order for his contributions to the Bulgarian-French police force cooperation during his tenure as a Secretary General of the Bulgarian Interior Ministry. The Mayor thanked French President, Nikolas Sarkozy, who as French Interior Minister in 2003-2004, had donated EUR 5 M to Bulgaria for the purchase of police equipment.

The Mayor further spoke about the difficult current moral and financial state of the Bulgarian Interior Ministry and appealed to French representatives to help boost the Bulgarian policemen's self-esteem.