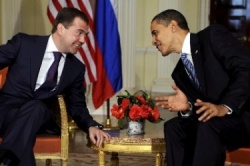 Russian President, Dmitry Mevedev, (L) and the US, Barack Obama (R) met for the first time in London Wednesday. Photo by BGNES

The two most powerful men in the world, Presidents of the US and Russia, held talks in London Tuesday.

The discussion was the first in more then a decade.

Obama is quoted as saying there were very real differences between Washington and Moscow, but that there was also a broad set of common interests. Medvedev said he viewed prospects for future bilateral relations "with optimism".

The two are in London to participate in the G20 summit of world leaders.

They met in the Residence of the US Ambassador to the UK and the meeting lasted 1 hour and 25 minutes instead of the initially scheduled 50 minutes. Both Medvedev and Obama are reported to have been in good spirits and joking about different topics.

During a press conference after the talks, the two presidents again declared their optimis, gave high marks of the discussion and announced they agreed to meet again in July in Moscow.

At the G20 meeting Obama spoke of the "sense of urgency" regarding the global financial crisis, but rejected criticism that his country created a conflict with others regarding funds to stimulate the economy.

Obama also met with British Prime Minister Gordon Brown where he, reportedly, refused to admit the US were the culprit for the current bleak global financial and economic state, adding he did not want to look back and seek the guilty.