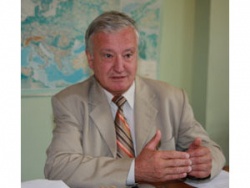 One of BulgariaвЂ™s вЂњcelebrityвЂќ weathermen, Latin Latinov, passed away Saturday after a short illness. File Photo

Prominent Bulgarian meteorologist, Latin Latinov, passed away Saturday at the age of 63.

The information was reported Monday by the National Institute of Meteorology and Hydrology at the Bulgarian Academy of Sciences.

Latinov died after a short illness. He was one of Bulgaria's most prominent scientists in the area of the forecasting meteorology and long-term weather forecasts.

Latin Latinov is the author of numerous popular articles and TV shows, which made him a "celebrity" weatherman and increased the prestige of the National Institute of Meteorology and Hydrology.

"People accepted Latinov the way they accept the weather. By teaching young scientists to become weathermen, he left a strong legacy," the Institute's Director, Konstantin Tsankov, is quoted as saying.

Latinov has graduated with a Major in Physics from the Sofia University "St. Kliment Ohridski." In 19771 he has been hired at the Meteorology Institute, in the "Weather Forecast" department. He obtained his PhD in long-tem forecasts in 1983 in the Russian city of Sankt Petersburg. Latinov was later appointed Head of the "Weather Forecast" department, and since 2003 had acted as the Head of the "Operational Forecasts" section at the National Institute of Meteorology and Hydrology at the Bulgarian Academy of Sciences.

Latinov will be buried Tuesday.