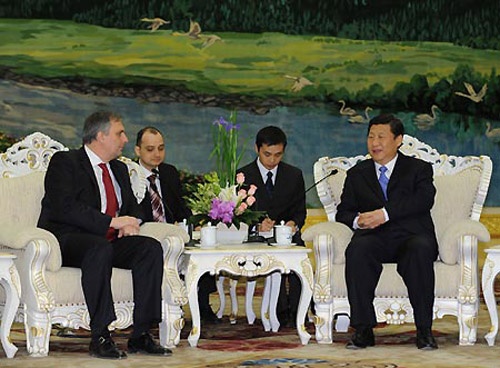 Bulgaria's Foreign Affairs Minister has become an honorary professor at a Shanghai university. Photo by xinhua

Bulgaria's Foreign Affairs Minister, Ivaylo Kalfin, has been presented with the title of honorary professor by the East China Normal University in Shanghai.

Minister Kalfin is on an official visit to China. The awarding ceremony was conducted directly by the university rector and was attended by the consular generals of the Ukraine, Romania and Turkey in Shanghai late Tuesday.

Kalfin delivered a lecture on "The role of the Black Sea region and Bulgaria's contribution to its development." Later Kalfin had a meeting with top businessmen in Shanghai, including the directors of Bulgarian yogurt producers, Standart daily newspaper reported.

Earlier in his visit Kalfin met in Beijing with his Chinese counterpart Yang Jiechi and with Vice President Xi Jinping.

Both sides expressed their deep satisfaction from the strong economic and cultural ties between the two countries in the wake of the 60th anniversary of establishing diplomatic relations between Bulgaria and China.