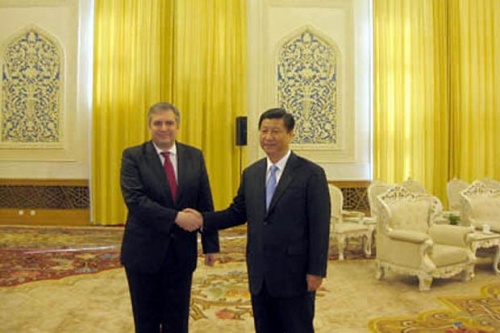 Kalfin, who is also Bulgaria's Deputy Prime Minister, met in Beijing with his Chinese counterpart Yang Jiechi and with Vice President Xi Jinping.

Both sides expressed their deep satisfaction from the strong economic and cultural ties between the two countries in the wake of the 60th anniversary of establishing diplomatic relations between Bulgaria and China.

New forms of cooperation in the light of Bulgaria's membership in the European Union and the global financial crisis were discussed during both meetings.

Trade and economic relations between Bulgaria and China will be enhanced through projects in the areas of environmental protection, new farming technologies and the development of human resources.

The Chinese officials pointed out that the Chinese government has decided to encourage leading Chinese companies to invest in Bulgaria, especially in the infrastructure and construction of electric power plants using renewable sources.

Kalfin presented the nomination of Bulgaria's Ambassador to France, Irina Bokova, for Director General of UNESCO.