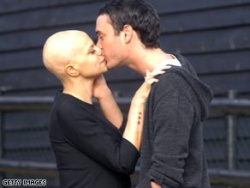 Goody's death from cervical cancer at the age of 27 is a tragic end to a very modern tale after spending seven years in the full glare of the media.