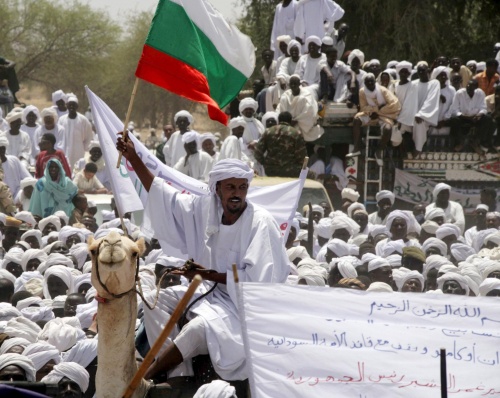 Bulgaria's flag appeared mysteriously at a street rally in Sadbo, Darfur, Southern Sudan, in which locals expressed their support for ICC-indicted President of Sudan, Omar Hassan al-Bashir. Photo by BGNES

Bulgaria's flag was raised mysteriously during a street rally in the town of Sabdo in Darfur, Southern Sudan.

A picture of the demonstration, in which locals rallied to support the Sudanese President Omar Hassan al-Bashir, facing an International Criminal Courts arrest warrant, captured a Darfur resident riding a camel and waving a Bulgarian flag.

The picture was made by EPA, and is provided by the BGNES news agency.

It is still a mystery how the Bulgarian flag ended up at a street rally in Southern Sudan, and what is the meaning of its presence there, if any.

An International Criminal Courts arrest warrant has been issued against the Sudanese President Omar Hassan al-Bashir indicting him for crimes against humanity that include murder, rape and torture.

In retaliation Bashir has ordered the expulsion of foreigners working with thirteen aid organization in the destituted Darfur province where up to 300,000 people may have perished and over two million have been displaced.