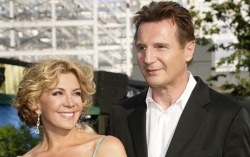 Natasha Richardson and Irish actor Liam Neeson got married in 1994. Photo by www.telegraph.co.uk

British actress Natasha Richardson has died in a New York hospital at the age of 45.

"Liam Neeson, his sons, and the entire family are shocked and devastated by the tragic death of their beloved Natasha. They are profoundly grateful for the support, love and prayers of everyone, and ask for privacy during this very difficult time," the statement reads.

Richardson was transferred Tuesday night to the New York "Lenox" hospital suffering from head trauma she sustained during a fall on a beginners' slope at the Mont Tremblant resort in Quebec on Monday. The accident happened while the actress was taking a supervised skiing lesson. Richardson initially showed no sign of injury but about an hour later she was taken to a nearby hospital after feeling unwell. It was later confirmed her injuries were critical, BBC reports.

Richardson and Neeson, 56, have two sons, Michael, 13, and Daniel, 12. The boys, Neesom and the actress' mother - Oscar-winning actress Vanessa Redgrave, 72, had gathered at her bedside.

Part of the Redgrave acting dynasty, Natasha Richardson was the daughter of Redgrave and director Tony Richardson. Her grandfather, Sir Michael Redgrave, was a famous British actor.

Richardson starred in films and TV but won most acclaim for her stage work.

Her first film role was a bit part in her father's "The Charge of the Light Brigade" (1968), made when she was 4. After a handful of roles through her teens and early 20s, she broke through as Mary Shelley in Ken Russell's film "Gothic," and followed that up as Patty Hearst in Paul Schrader's 1988 film of the same name.

Some of Richardson's greatest successes were on the stage. At 22, she played opposite her mother and Jonathan Pryce in a London production of Anton Chekhov's "The Seagull"; the performance earned her the London Drama Critics' most promising newcomer award.

Natasha Richardson won a Tony for her performance as Sally Bowles in the 1998 revival of "Cabaret" and earned raves for her Blanche DuBois in a 2005 production of "A Streetcar Named Desire." She was scheduled to perform in a revival of Stephen Sondheim's "A Little Night Music" this year, following a January benefit performance of the show.

In 2007, Richardson worked with her mother in the film "Evening."

"This is the one time my mother and I are going to play mother and daughter on screen, so you've got to take advantage of it," Richardson said at the time.