Court Rules Bulgarian Byzantine Treasure Should be returned by Greece 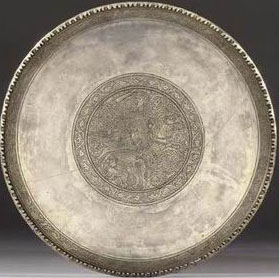 One of the plates at the center of the argument between Bulgaria and Greece. Photo by balkantravellers.com

A Bulgarian court has ruled for the confiscation of the nine Byzantine plates purchased by three Greek museums in 2004. The confiscation is possible on the basis of a special EU law, which Greece has not yet adopted, according to the Greek daily newspaper Kathimerini.

Bulgaria argues that the Byzantine treasure, which dates to the twelfth century, was acquired during illegal excavations in 1999 and then smuggled out of the country. Greece, on the other hand, says that the three museums purchased the plates from a Greek collector in London with money donated by citizens, including Prime Minister Kostas Karamanlis, and supplied by the Ministy of Culture.

The Greek museums have not yet stated their official position as they will first agree on it with the ministries of foreign affairs and culture.

The dispute over the ownership of the plates caused them to be excluded from Europe's biggest Byzantine-themed exhibition of the last 50 years, Byzantium 330-1453, which is displayed at London's Royal Academy of Arts until March 22.

The Byzantine Heritage Museum in Thessaloniki, the Benaki Museum and the Byzantine and Christian Museum in Athens each display three of the nine silver plates decorated with gold, balkantravellers.com reported.

In July of 2007, Bulgaria lodged an official demand with Greek authorities to return the plates, saying they were illegally excavated near the town of Pazardzhik in central Bulgaria and smuggled out in 2000-2001. Greece, which claims that the acquisition was not illegal, purchased the set for over EUR 2 M in 2004, following considerable international publicity, which it now uses in its defence.