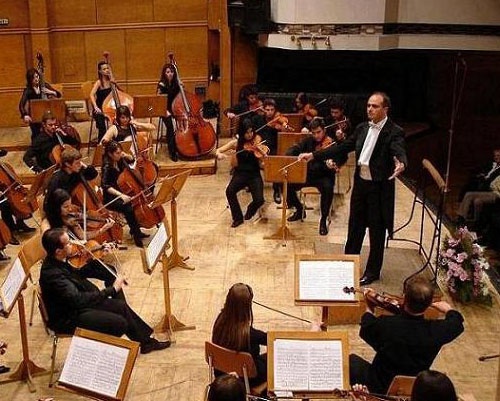 Bulgaria's star conductor, Grigor Palikarov, makes his US debut in cleveland this weekend. Photo by bulgarianvirtuosi.com

Bulgaria's National Opera conductor, Grigor Palikarov, is set to make his US debut this weekend in Cleveland in the Opera Circle production of Pietro Mascagni's "L'Amico Fritz".

Palikarov stated; "As a young conductor, I swore I would never do opera," the Bulgarian conductor said the other day. "That was a huge mistake. The next year, I had my debut in 'Rigoletto.' And so, I was a full-time opera conductor. Can you believe?" he stated to cleveland.com.

Palikarov, 37, is no stranger to "L'Amico Fritz." As an assistant conductor at the National Opera and Ballet Theatre in Sofia, he was handed one performance of the work in December 1998, the same month he led "Hansel and Gretel" and a concert starring the voluminous-voiced Bulgarian soprano Ghena Dimitrova.

Before this month, Palikarov had stepped onto North American soil once: He took part in a festival of Bulgarian music in Toronto in 2001, when he got a glimpse of the United States from the Canadian side of Niagara Falls.

His American debut in Cleveland was initiated by Hristo Popov, concertmaster of the Opera Circle Orchestra. Popov knew the company was looking for a conductor for "L'Amico Fritz," so he contacted a friend, cellist Kalin Ivanov, at the management firm Bulgarian Virtuosi Artists, which represents Palikarov.