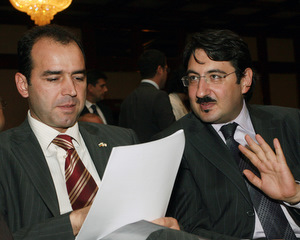 The Governor of the Bulgarian National Bank, Ivan Iskrov, said Thursday the currency peg practically made Bulgaria an informal member of the Eurozone.

Iskrov took part in the Invest in Bulgaria 2009 Summit, which took place in Sheraton Hotel in Sofia.

He said that the stable currency rate of the Euro compared to the Bulgarian Lev was the reason to assume that Bulgaria is virtually in the Eurozone. That is a result of the important decision of all Bulgarian governments since 1997 to keep the Currency Board until being accepted in the Eurozone.

Iskrov is convinced that Bulgaria is a very attractive place for investors, because it is not any longer "a catching up economy", but "an advancing one".

"It is about time that media and investors try to differentiate between each country, whether it is from Central and Eastern Europe, Asia, or Latin America... There are many different criteria to describe each country as being reliable for investments or not", Ivan Iskrov said.

"The crisis in Bulgaria is more an economic one, than financial... It resulted from an import of issues form other countries... If we are part of the European Union, and investors, such as Germany, Italy, and Greece, experience financial difficulties, Bulgaria will be affected, too", Iskrov explained.

He also said that 70% of the Bulgaria's total national debt was intra-business, which means that banks, or companies loan money to their subsidiaries", Iskrov said.

"Bulgaria keeps a big budget surplus as part of its fiscal policy in order to remain independent. Our country is attractive for investors but its potential is in the mid and long-term investments. In the medium and long run, Bulgaria will boast a higher than the average EU economic growth."