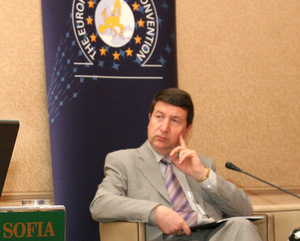 The head of the InvestBulgaria Agency, Stoyan Stalev, compared Bulgaria to China's East Coast in terms of the advantages it offered for foreign investors. Photo by Assya Filipova

The Director of the InvestBulgaria Agency, Stoyan Stalev, said Thursday that Bulgaria was not less attractive for foreign investors than the world's top investment destination, the East Coast of China.

Stalev spoke at the Invest in Bulgaria 2009 Summit, which took place in the Sheraton Hotel in Sofia, elaborating on Bulgaria's investment advantages.

The InvestBulgaria Agency head pointed out that Bulgaria was mostly attractive for foreign investors because of its potential as an export location close to markets with some 800 million inhabitants in the EU, Russia, Turkey, the Middle East, and Central Asia.

Stalev pointed out that the main investment strategy of the Bulgarian government, which his agency supported, was to put forth Bulgaria's combination of advantages, which included the macroeconomic and political stability, the really favorable taxation policy, the qualified labor force, the general low production costs, and the improving bureaucracy.

Data presented by Stalev showed that foreign companies invested EUR 30 B in Bulgaria since 1990, and EUR 19 B of these were invested only in the 2006-2008, i.e. after Bulgaria completed its EU accession negotiations in 2004.

Stalev pointed out the InvestBulgaria Agency was trying as a priority to attract investors from France within the EU, and from China, Japan, and Korea from the potential non-EU investors.

The Invest in Bulgaria 2009 Summit is organized by the Brussels-based European Finance Convention. Novinite.com (Sofia News Agency) is official media partner of the event.