China PM: Most Difficult Year This Century Due to Financial Crisis 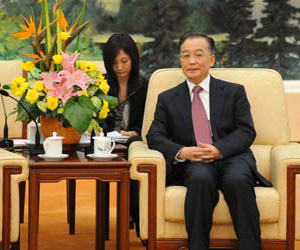 Chinese PM Wen Jiabao stated that the current year will be the most difficult the country has faced this century because of the global economic crisis. Photo by aoyun.cctv.com

Chinese PM Wen Jiabao has said the current year will be the most difficult the country has faced this century because of the global economic crisis, while announcing the latest program to stimulate the China's economy, the BBC reported Thursday.

Addressing parliament, Wen reiterated that there would be a USD 585 B investment program to stimulate the Chinese economy.

He also declared an annual growth target of 8% and goals to boost consumption and raise consumer demand. His address opened the annual session of the National People's Congress.

Wen added that he hoped to create nine million new jobs in the cities and increase local government spending budgets by almost 25%.

"In China, a developing country with a population of 1,3 billion, maintaining a certain growth rate for the economy is essential for expanding employment for urban and rural residents, increasing people's incomes and ensuring social stability," he said.

Wen was frank that China was suffering from the global financial crisis, and acknowledged the country lacked adequate social security provisions and health care.

The increased spending talked about by Wen in his keynote speech was announced last November. There appeared to be no new money to help the ailing economy, as some had speculated.

Extra government money will be spent on infrastructure projects, such as railways, roads and irrigation schemes.

On the eve of the meeting, China said it would increase military spending by 14,9% this year to USD 70,2 B.