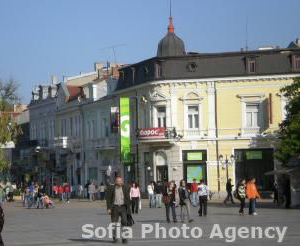 Many Romanian businesses have started to move their operations to the Bulgarian city of Ruse to avoid the worst effects of the global financial crisis. Photo by Yuliana Nikolova (Sofia Photo Agency)

Romanian businesses have started to move on mass to Bulgaria, in an attempt to avoid the worst affects of the current global financial crisis in their home country, Bulgarian daily newspaper Standart reported Thursday.

The Bulgarian border city of Ruse has already seen a boom in rental property business and is expecting this to continue well into 2009.

This business orientated migration comes about due to the lower running costs of businesses in Bulgaria, up to 40% less according to some experts. Wages for staff are much lower along with insurance payments and electricity bills according to Kamen Kolev the Director of the Bulgarian Industrial Association.

Kolev also added that multi-national companies from Bulgaria's Southern neighbor Greece are also starting to move their attention to Bulgaria for the same reasons. He added that the average wage in Bulgaria is EUR 267 while in Greece it is EUR 1400.