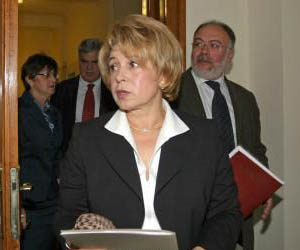 Emilia Maslarova, Bulgaria's Labor Minister, expects a rise in unemployment in 2009 due to the financial crisis. Photo by Yuliana Nikolova (Sofia Photo Agency)

Emilia Maslarova, Bulgaria's Minister of Labor and Social Policy, has suggested that unemployment in the country will rise sharply over the next few months. Maslarova expects many more people to be looking for work in 2009, Darik Radio reported Saturday.

Minister Maslarova went on to say that the Bulgarian government would aim to provide an extra 55 000 - 60 000 job posts in 2009 to help the country cope with the global financial crisis, "especially needed because of the large number of Bulgarians returning home from abroad."

"Foreigners- mainly UK and Belgian citizens have also started to enter the Bulgarian job market, which shows how bad the crisis is in some of the old EU countries" Maslarova concluded.