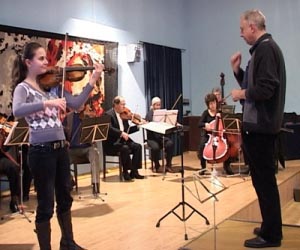 Professor Anel Stankov has been awarded the first MBE for a Bulgrian since 2000 in an official ceremony at the UK Embassy in Sofia. Photo by dianacable.net

At a formal ceremony on February 25 Williams presented the honor at the UK Embassy in Sofia.

The MBE was presented for Stankov's "outstanding contribution to the promotion of cultural relations between the United Kingdom and Bulgaria, particularly in the field of classical music," the UK embassy said.

It is the first time since 2000 that such an award has been conferred on a Bulgarian.

At the ceremony, Stankov gave a short violin recital.

Williams told the ceremony that 2009 marks the celebration of 130 years of diplomatic relations between the UK and Bulgaria.

It also marked the 75th anniversary of the founding in the United Kingdom of the British Council, which has been responsible since its foundation for promoting cultural and educational relations world-wide.

"It is therefore a happy co-incidence that we are today to celebrating the lifetime contribution of Professor Angel Stankov to the promotion of cultural relations between the UK and Bulgaria," Williams said.

Stankov grew up in an English-speaking family. His father was President of the English Speaking League in Bulgaria and was legal advisor to the British embassy. His mother was a teacher of English Phonetics. Stankov did his postgraduate musical study in London, at the Guildhall school of Music and Drama with Professor Yfrah Neaman and at the Royal Academy of Music with Professor Manug Parikyan.

Stankov's first recital in the UK was in 1974 at the Llandaff Festival in Wales. He has since performed many times in Britain and has recorded for BBC television and radio. He has also served on the examination panel of the Guildhall School of Music and Drama for concert diplomas.