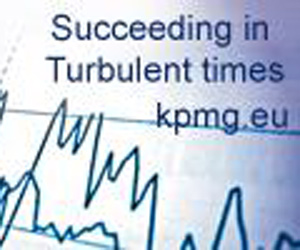 Bulgaria has very good chances to benefit from the global financial crisis, according to experts from the consultancy company KPMG Europe. Photo by KPMG Europe

Bulgaria has very good chances to benefit from the global financial crisis, according to experts from the consultancy company KPMG Europe, cited by the Darik radio.

Wednesday, Torsten Aman from KPMG Europe offered an analysis of the situation on international markets, but said that he could not yet forecast the final outcome.

Aman was, however, firm that in the light of the current crisis, many leading European businesses were going to transfer their production from China and India to Member States of the European Union, which would be of great benefit to Bulgaria.

Aman said that the crisis originated from the US financial markets, mostly from the mortgages' expansion. He said that liberal granting of loans made many people live beyond their means and lowered trust in financial institutions.

Gergana Mantrakova, Managing Partner of KPMG Bulgaria explained that, at the moment, companies could be divided in several types, according to their behavior: those fighting to survive, those fighting to keep their positions, those experiencing some risks, and those trying to profit from the crisis.

KPMG experts further stated that the crisis could be neutralized only through international efforts while national measures were only going to have a short-term effect.