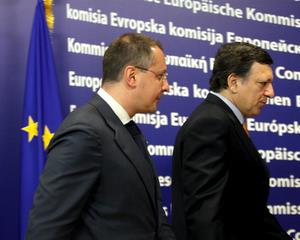 EC's interim report criticizes Bulgaria's failure to combat corruption and organized crime while pointing to some positive steps by the cabinet of Sergey Stanishev (left). Photo by BGNES
The Interim Report of the European Commission, which is due to come out on Thursday, is criticizing Bulgaria for its same old issues - severe deficiencies in fighting corruption and organized crime.

The news was reported Wednesday night by the Brussels correspondent of the Bulgarian National Television.

The EC Interim Report points out that well-known Bulgarian criminals still had not received any sentences, and that the functions of the Interior Ministry and of the State National Security Agency (DANS) were yet to be differentiated.

It also states that clearer regulations were needed regarding the use of tapping devices and the parliamentary control over DANS.

The Report recognizes that the Socialist-led government of Prime Minister Sergey Stanishev had made reform steps in this respect, and cites a certain pilot project recently started by the cabinet.

The Brussels document also states that the next steps of the Bulgarian authorities must be convictions of the well-known organized crime groups. The EC points out that Bulgaria needed a far-reaching reform in the pre-court phase of the judicial procedures in order to improve the admissibility of evidence material.

According to the BNT Brussels correspondent, the EC Interim Report on Romania, Bulgaria's northern neighbor has made no progress but has regressed in its problem areas. It states that the Romanian government was restricting its security services in their efforts to prosecute crimes.

The Report points out that Romania's judicial system is very politicized, and that this problem is becoming worse as this often prevents corruption investigations against top-ranking politicians.