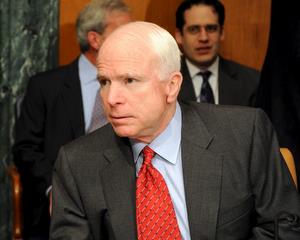 Tsonev had met McCain during his trip to the US last week.

Republican Senator John McCain rivaled the new US President Barack Obama in the US Presidential elections in November, 2008.

Last week Defense Minister Tsonev traveled to Washington DC to attend the National Prayer Breakfast at Barack Obama's invitation. While in the US, the Bulgarian Defense Minister also had a meeting with his US counterpart Robert Gates.