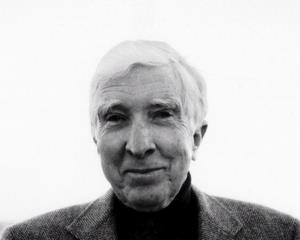 The American novelist John Updike died Tuesday at the age of 76. Photo by BGNES

John Updike, one of the greatest novelists of his age, passed away Tuesday at the age of 76. Updike's novels and detailed dissections of the soul of post-World War II middle America, placed him at the very pinnacle of his profession.

Works such as Couples and the Rabbit series chronicled the obsessions, passions and anxieties of three generations, reported the BBC.

Often controversial, he remained at the cutting edge of literature into his 70s and, with his most celebrated character, Harold "Rabbit" Angstrom, he found an authentic 20th-Century everyman.

The son of a schoolmaster, John Updike was born in Pennsylvania in March 1932 and, after attending Harvard, spent a year in the UK, as a student at the Ruskin School of Drawing and Fine Art at Oxford.

Later he joined the staff of the New Yorker magazine, to which he contributed numerous poems, essays and short stories.

Updike's first novel, The Poorhouse Fair, was published in 1959, to mixed, but generally favourable, reviews.

The following year, though, saw the publication of the book which established him as one of the greatest novelists of his age.

Rabbit, Run marked the debut of his most enduring, if not endearing, character, Harold "Rabbit" Angstrom.

During the mid-60s, works such as The Centaur and Of the Farm brought Updike critical acclaim but Couples, published in 1968, gave him his first popular success.

Though the author does not hesitate to give detailed descriptions of sexual intercourse, he does so with a lucidity and reverence that is completely removed from pornography.

Altogether, John Updike published more than 50 novels: one of his novels about Harold Angstrom, Rabbit is Rich, won the 1982 Pulitzer Prize for fiction, while Rabbit at Rest won in 1993.

Though often berated by critics for his seeming obsession with golf and sex, it is his mastery of the English language, its nuances, vagueries and sheer beauty, which brought John Updike millions of admirers.