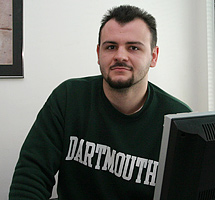 In September 2007, I had the honor of listening to Barack Obama firsthand, standing just several feet away from him as he spoke to the students at my college in a small New England town.

Obama and seven other bidders for the 2008 Presidential Nomination of the Democratic Party were in my school where they had a nationally televised debate in their competition to clinch the nomination.

After the end of the debate, each of the bidders came to speak directly in front of the college students. Obama was the first one to do so. He was still just one of eight bidders, the African-American candidate, no one could really say he had great chances of getting nominated, not to mention getting elected.

But as soon as he appeared and began speaking, I can swear I started to believe he was going to make it all the way to the White House. I will always remember these several minutes not just because of his striking charisma but also because of the integrity, firm belief, and modest self-confidence that his whole being demonstrated.

Everyone else paled after Obama. And I am talking here of experienced American politicians and effective public speakers like John Edwards, Joe Bidden, Bill Richardson, Hillary Clinton, Dennis Kucinich. None of them was like Obama.

Some months later I spent dozens of sleepless nights trying to come up with the best Bulgarian translation of Obama's language in his book "The Audacity of Hope". My mind had to pierce through his every word in order to reach to the heart of his ideas, experiences, and motives, so that I can convey them truthfully and effectively in the Bulgarian language.

Much has been and even more will be said of Obama, the man who started to make history long before entering the Oval Office.

As a person who has spent several years in America, and has come to know both its good and bad sides (fortunately or not, my stay there coincided with the so called Bush Era), and who is now speaking as a citizen of his home country, I would just like to point out one thing about Obama that I believe is crucial.

Obama understands the world. And not just Indonesia, Hawaii, Chicago's West Side, Kenya, the Ukraine, etc. Obama knows the world beyond America's borders probably better than any other President in American history ever has.

The most powerful and influential country on the planet does deserve to have a President who understands the rest of the world. And the world itself deserves that as well. For the US Presidential Elections are quite unfair. These are the only elections whose outcome affects directly some seven billion people around the world; yet, only 300 million American citizens are entitled to vote in them.

This time, however, after America's 2008 Elections, the World has found its first President - President Barack Obama.

A tremendous weight is placed on President Barack Obama's shoulders as the eyes not only of his own nation but also of many other nations are all upon him. I for my part, though, am not concerned by the chances of him failing to live up to all these expectations.

Because I, like many others, heard what he said not only to the Americans but to all people: "YES WE CAN."