The Road to the White House: The Barack Obama Timeline 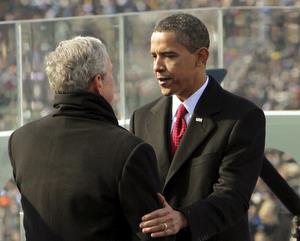 President Barack Obama is thanking his predecessor George W. Bush for his service to his country. Photo by BGNES
Source: barack-obama-timeline.com

1959
Barack Obama's father, Barack Obama, Sr., an outsadnding Kenyan student, is awarded scholarship from an American program offering Western educational opportunities. At the age of 23 Barack Obama Sr. leaves behind his pregnant Kenyan wife Kezia and their baby son and arrives in the United States to study math and economics at the University of Hawaii, Honolulu. Barack Obama Sr. is the first African student in the university.

1961
February 2, 1961 - Barack Obama Sr., 25, marries 18 year old Ann Dunham, a white American student he meets in a Russian-language class only a few months earlier. The ceremony takes place at Maui. At the time of their wedding, Ann Dunham is already three months pregnant with Barack Obama, Jr., and she doesn't know Barack Obama Sr. has a wife and children in Kenya. Back in 1961 interracial marriage in the U.S. is rare and in some states illegal. The couple settles in Honolulu.

After a while Ann Dunham falls in love with another foreign student, Lolo Soetoro of Indonesia, and the two start dating.

1965
Barack Obama Sr. completes his Masters degree at Harvard and goes back to Keyna with Ruth Nidesand, an American-born teacher he met. Ruth becomes his third wife. Barack Obama Sr. aspires to put his education to use in poverty stricken Kenya.

1967
Ann Dunham marries Lolo Soetoro. When Barack Obama, Jr., is 6 years old, the family moves to Jakarta, Indonesia, Lolo's hometown. In Indonesia Barack Obama becomes familiar with poverty, beggars, and children dying from illnesses. The house they live in has no stable electricity and the streets in their neighborhood are not paved. Ann gets a job as an English teacher at the American embassy. Barack Obama Jr. attends Franciscus Assisi Primary School, which is a Catholic school.

1969
Lolo Seotoro, Barack Obama's stepfather, is promoted in the American oil company he works for, and he relocates the family to a better neighborhood. Consequently, Barack Obama leaves the Catholic school and attends a public school closer to the family's new residence.

1970
Barack Obama's half sister Maya Soetoro is born. However, Ann Dunham's second marriage begins to disintegrate. She misses her home in the U.S. and wants her children to grow and be educated there.

1971
When Barack Obama is 10, his mother sends him back to Hawaii, to live with his white grandparents in their two bedroom apartment. With the help of Ann's parents, Barack Obama gets a scholarship to Punahou, a prestigious prep school in Honolulu. He's one of few black students at the school, and his classmates regard him as 'the black kid from Indonesia.' Barack Obama's separation from his mother has a tremendous impact on him.

1972
Ann Dunham returns from Indonesia to Hawaii with 2 years old Maya to join Barack, now 11. She leaves her husband, Lolo Soetoro, behind.

In Hawaii Ann Dunham pursues a master's degree in anthropology at the University of Hawaii. She and her two children live in a small apartment in Honolulu.

During this year Barack Obama's father arrives from Kenya for a short visit. During the visit, Barack Obama Sr. makes all kinds of statements about what Barack Junior should be doing. For Barack Obama, his father's presence is confusing and conceived as a disruption. Young Barack doesn't feel his father is entitled to make such statements. This visit is the last time Barack Obama sees his father.

1975
While in high school, Barack Obama joins the basketball team and becomes a leader in class. However, Barack doesn't feel he fits in. Barack tries to act tough so he drinks beer, smokes marijuana and tries cocaine.

1979
Barack Obama begins his first year at Occidental College, Los Angeles. He becomes friends with several black students, but still doesn't feel as one of them.

At the end of his sophomore year, Barack Obama transfers to Columbia University in New York. Obama becomes a disciplined student. He reads many books about race and social injustice.

1982
Barack Obama, now 21, receives notice about his father's untimely death. Barack Obama Sr. was involved in a car accident and died at the age of 46.

Barack Obama decides to pursue a career as a community organizer to confront the issues of race and poverty.

After graduation, Barack Obama takes a job with a Chicago based group called Developing Communities Project. Barack begins working to improve the conditions of a public housing project.

1988
Barack Obama is now 26 years old. Before beginning his law studies, he decides to visit Kenya. He arrives in the village of Alego, situated on Lake Victoria, his father's hometown. He arrives there because he knows very little of his father. He wants to know who his father was, so he can understand his own identity. In Alego, Barack Obama meets his late father's family for the first time. He meets his grandmother and half siblings, cousins, nieces and nephews. The trip to Kenya helps Barack Obama realize the struggles that his father went through. It gives Barack a sense that the work he is doing is directly connected to his Kenyan family and their struggles. Barack Obama says: "[the visit] helped unify my outward self with my inward self in an important way."

Barack Obama begins his studies at Harvard Law School. At the end of his first year, a top law firm hires Obama as a summer intern in Chicago. There Barack Obama meets a young lawyer, Michelle Robinson, and the two start dating.

Barack Obama goes back to Harvard and keeps a long distance relationship with Michelle.

At the end of his second year, Barack Obama applies for the president of the Harvard Law Review.

1992
Barack Obama returns to Chicago and joins his then girlfriend Michelle Robinson.

Barack Obama begins working at the firm of Davis, Miner, Barnhill & Gallard as a junior lawyer, hoping to work on civil rights cases.

Barack Obama is teaching constitutional law at the University of Chicago Law School.

1998
Barack and Michelle Obama's first daughter is born. She is named Malia Ann.

Barack is rerelected to the Illinois Senate.

1999
Barack Obama runs for Congress. He rival is Rep. Bobby Rush, an experienced politician. During the campaign, a pivotal vote on gun control legislation is due in the State Senate. When the vote comes on the floor, Barack Obama is in Hawaii visiting his 18 months old daughter, Malia, who is ill. The gun control bill does not pass. Barack Obama takes a lot of political heat for not attending the vote and consequently loses the election by a 2 to 1 margin.

Barack Obama resumes his work at the Illinois State Senate and in the course of several years succeeds to pass some twenty pieces of legislation.

2001
Barack and Michelle's second daughter is born. She is named Natasha (and often called Sasha).

2002
Barack Obama is reelected to the Illinois Senate.

On January 2003, Barack Obama formally enters the race for the United States Senate. During the primaries, his Democratic rival, Blair Hull, takes the lead but after a short while drops it when domestic abuse allegations surface.

Jack Ryan's campaign is affected by sex scandal reports and Ryan is forced to quit the race.

The Illinois Republican Party drafts Alan Keyes, a former ambassador, to run against Barack Obama for the U.S. Senate, in place of Jack Ryan.

July 7, 2004 - Boston, Massachusetts: The Democratic National Convention -42 years old Barack Obama is chosen to deliver the keynote speech. This inspiring speech is viewed as a defining moment in Barack Obama's political career and it earns him a worldwide recognition.

November 2, 2004 - Barack Obama, 43, is elected for the U.S. Senate. The outcome of the race is unprecedented. Barack Obama receives 70% of the vote, while Republican Alan Keyes receives only 27%. Barack Obama is the nation's fifth African-American Senator.

Barack's first law is passed with Republican Tom Coburn. The law allows every American to go online and see exactly how tax dollars are spent.

2007
February 10, 2007 - Barack Obama announces his candidacy for President of the United States in the 2008 U.S. presidential election.

2008
June 3, 2008 - After defeating Senator Hillary Clinton in the primaries, Barack Obama becomes the presumptive nominee of the Democratic Party for the 2008 presidential election.

2009
January 20, 2009 - Barack Obama is sworn in as the 44th President of the United States of America
People » Be a reporter: Write and send your article
Advertisement
Advertisement
Expats.bg All Are Welcome! Join Now!
More from People